I’ve sworn up and down that I would start updating this site a little more in-depth but between working all the GNCC’s doing a little of everything, working at Powersport Grafx and occasionally just wanting to spend my very few moments of spare time actually riding a motorcycle, I’ve been incredibly slack on updating anything on this site. However, it’s not like anyone actually cares. If more than 6 of you read this whole post all the way through, I’ll probably poop a chicken.

Anyway, it’s been so long since I’ve done one of these On The Road With Bolt-On deals that I actually had to look back to even remember where I left off.  The last I left off, I recapped a bunch of stuff including the Snowshoe GNCC and mentioned going to some of the ATV Motocross rounds, buying a new truck, blah blah blah. Well, sometimes I’ve got a good memory and I could sit here and tell you all the little details about going to the RedBud ATVMX round then driving straight to Loretta Lynns for a few weeks, then coming home, then more and more and more but honestly, a lot of that is old news and isn’t all that interesting because I didn’t really come away with any overly exciting stories.

If we fast forward a little bit, the Unadilla GNCC went off pretty normal. No real crazy stories to tell from there this time around. The Gusher GNCC was an all new round this year and was an absolute amazing piece of property and an all around awesome course… Until it started to rain about the same time the morning ATV race started. The whole place turned into a pretty nasty slopfest and I spent a lot of time pushing, pulling, and towing quads and bikes through the weekend while also taking the time to film some of the action for RacerTV.

Now, rewind to the Friday before the race. At most of the races this year I’ve made a lap with a helmet cam to be featured in the course description for GNCCLive on RacerTV.com. I hopped on Tommy Harris’s sweep bike for a helmet cam lap Friday before The Gusher. Tommy had been experimenting a little with a trials tire. I’ve ridden them before, they work great for rooty rocky stuff but just aren’t my cup of tea. Well, I take off from the finish line and ride some trackside pitting sections before hitting a small patch of woods. On the exit of those woods you went out into more trackside pitting, then tied back in around the 3rd turn of the start. It made a few more turns then went back in the woods.

Well, on the last turn before you arched back into the woods, I came out a little hard and the back end started to step out. I didn’t think anything of it because I’ve done it quite a few times and it always looks really cool. There were probably 25 or so people around, so I had to look fast for them. Well, I forgot about the trials tire and ended up doing a complete 180 on the ground in front of all those people. I jumped right back up, threw a fist pump, got on the bike, and kept going. That was cool.

One cool thing I got to do, was head down to Georgia to be a bridesmaid for my best friend, Katie Norton, errr, Katie McDaniel now. Yeah, if you’ve never seen a male bridesmaid before, it may seem a little weird but it was definitely an honor and I had a blast doing it. It’s been a few weeks but I still have to give Katie and Craig a huge congratulations. I didn’t get to wear a dress but I would’ve looked awesome in one.

So then some other things and stuff happened and we went to Powerline Park and that race was all normal and junk. I got Maria Forsberg’s gear as a sweet piece of wall decor for my house after Powerline. Then like 3 days later she announced her retirement. So, fast forward to The Ironman and I asked if I could be a part of her final number one plate presentation. Tim Cotter did all the real work but I got the opportunity to hand, not only one of the greatest female racers of all-time, but also someone I call a friend, her final number one. It was cool and stuff.

The weekend before The Ironman, Will Lackey offered to let me race this 08 KTM 250XC he just picked up and had rebuilt. So we headed to the Outback Mid-East hare scramble in Laurinburg, NC. Track was super awesome and the bike was a blast. I ripped a pretty good holeshot and led a portion of the race until the rear brakes went out around the 7 mile mark. I ended up riding a few miles with no rear brakes and dropped way back. Then suddenly, the brakes came back to life and I hammered down. I came through 5th on the first lap and started trying to make up some time. Then the rear brakes went out again in the same section of track, but came back a good bit sooner. 2nd lap I came through third, then worked my way up to finish 2nd in Sportsman. Not bad for a bike I’d never even seen until the morning of the race! 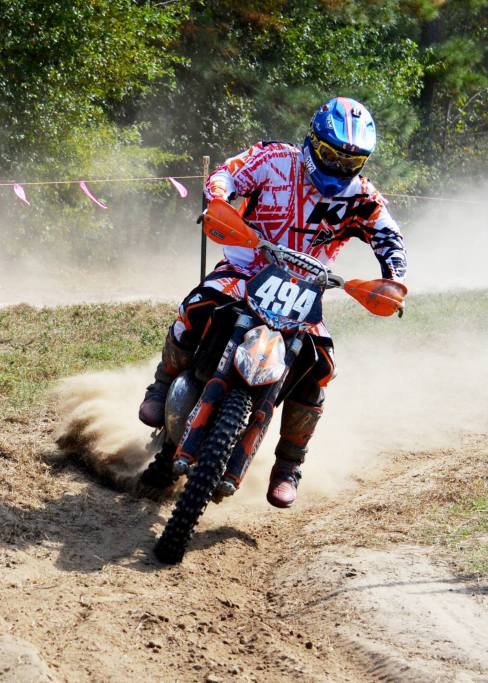 Nothing else super exciting happened at The Ironman either. It was basically just an excellent course and an excellent time to close out an excellent season. As always, I can’t thank the Shaver Family enough for letting us come enjoy their property. Oh and the new motocross track that’s going in there is going to be AWESOME. I saw the map of it and visualized a lot last year but there’s been some changes since then that I believe will ultimately make for an incredible track. Definitely don’t want to miss that one!

So basically, I just did an absolutely horrid job of recapping several months of my life and chances are you read the first 4 sentences and gave up because you knew you were in for absolute crap. The good news is, once I again I can say whatever I want like poop or fart or vomit or rectum or whatever.

Anyway, until the next time I decide to update this… Goodbye.